Which glue to use? A conversation with an expert.

This was the original question posed to Bee Miller, the technical service rep of Franklin International, makers of, among other things, the Titebond line of adhesives:

I've used only Titebond ("classic" I think you call it now) for most glue ups since I started making guitars 40 years ago.

The only drawback was it's relatively short open time. Some of my glue ups required extra open time, because it takes a long time to apply the glue with precision to all the surfaces that need to be covered during a complicated assembly procedure. I found the glue begin to start to thicken up before I had completed its application.

I've tried the several new titebonds that have recently become available, and ended up preferring Titebond II because it remains wet and creamy for a longer time, which gives me plenty of time to spread it with precision before closing the seam. The others, classic, Titebond III and Extend all seem to be extremely thick and quick to skin over. Extend especially seemed extremely thick and hard to spread--relative to the others.

But recently I've heard that titebond II is not the best choice for other reasons, not the least of which the fact that it is less creep-resistant than the others. Creep resistance is important, because guitars are under constant string stress and any distortion of the structure over time is prejudicial to its performance.

Given all these factors, which particular Titebond product would you recommend? I need good creep resistance and easy spreading.

Titebond Liquid Hide Glue and Titebond Extend Wood Glue have the greatest creep resistance and longest open and working time of any glues we carry. Both however have a limited one year shelf life and I am afraid you may have sampled some Titebond Extend that had gotten too old. If you would send me your delivery address and phone # (for delivery purposes) I could send you a fresh bottle of each to try for free. Many luthiers are big fans of the Liquid Hide Glue because jointsbonded with this glue can easily be steamed apart for repairs...The Titebond Extend has large particles added that plug some of the pores of the wood to slow down the absorption of water/moisture. Over time these
large particles want to settle to the bottom so this glue begs to be given a good stirring every 60 days or so, and can actually be used longer than the 1 year shelf life if kept stirred and still maintains a
good pourable, spreadable consistency. The Titebond Liquid Hide Glue can get a little thick if temps are below 65F or so, and it can be overcome by giving the bottle a warm water bath. It also can last longer than the one year shelf life. However, the animal proteins begin to break down and the glue can lose bond strength. There is a simple test to tell if it is still usable. Simply smear a thin film on a piece of paper and allow it to dry (this can take longer in a high humidity environment.) If it dries crisp and brittle and can be broken, it is still good to use. If it dries flexible or gummy, bond strength will be compromised and you should discard it.

I would welcome your feedback after experimenting for a few weeks.

Let me take advantage of this opportunity to ask you something further about Liquid Hide Glue. I've been making guitars for over 40 years and from the earliest years of my apprenticeship--and during the years of my career--I persistently received the following lore-as-truth from other practitioners:

1- Hide glue was the very best glue for making musical instruments because the resulting film separating the parts were crystalline and brittle, which served as the best sound conductor between them.

2- But that advantage applies only to hide glue made in a pot from flakes. Commercially pre-prepared room-temperature liquid hide glue was to be avoided because it was very bad, however. No one ever specified exactly how it was bad, just that it was to be avoided.

3- Because of the many headaches of actually using traditional flake hide glue, most instrument builders opted to put up second-best synthetic evaporative glues for their wide temperature range and convenience. It was said that the resulting film between the parts dampened the sound more than the "crystalline" hide glue film. But the convenience factor was the determining one. Still, the pre-prepared, convenient form of hide glue was nonetheless to be mysteriously avoided.

Are you familiar with this history of poor reputation of liquid hide glues within some sectors of the industry, in comparison to the traditional hot-pot form?

Indeed, what precisely are the differences between the resulting joint made by hide glue from flakes in a hot pot vs. commercially pre-prepared liquid hide glue?

We have not done any testing with traditional hot flake hide glues for many years. But we have always found that if our Liquid Hide Glue is used before the proteins break down (remember the paper smear test? brittle is good) it forms a strong, crisp, brittle film that is as good as provided by the flake hide glues. When we do shear failure tests on Hard maple, Titebond Original fails on average at 3,600 psi with 77% of the bonding surface area showing wood fiber failure. Titebond Liquid Hide Glue fails on average at 3,591 psi with 72% wood fiber failure.


[Ed: This is the standard test for adhesives. Two wood blocks are glued together with the test adhesive and then are pulled apart by a machine. The two numbers represent a) the pressure in pounds per square inch at which the two blocks finally pull apart and b) the percentage of wood at the joint from one block that remained steadfastly adhered to the other block (fiber failure). The remaining fraction where the glue failed and the joint surface remained clean and clear of wood fibers from its neighbor  remaining clear area where the glue failed at the joint surface. So the higher percentage of wood fiber failure (i.e., glue success), relative to the amount of glue failure shows how successful the performance of the adhesive.

We have always assumed that any rumors of poor performance with our Liquid Hide Glue was primarily an issue of using glue that was too old and did not form as brittle of a film because the proteins had begun to break down.

Our favorite phrase around here is "One test is worth a thousand expert opinions." I encourage you to test and convince yourself one way or another - hopefully we both win!

This conversation has evoked skepticism of the traditional lore in this regard--that commercially pre-prepared hide glue is inferior to hot-pot flake glue. All it takes is for several users to ignorantly assume that commercial pre-prepared hide glue need never be tested or agitated--and then as a result experienced several costly failures--in conjunction with the familiar older-is-always-better bias--for a false glue meme to be created. Stay tuned.

Hats off to Alan Chapman 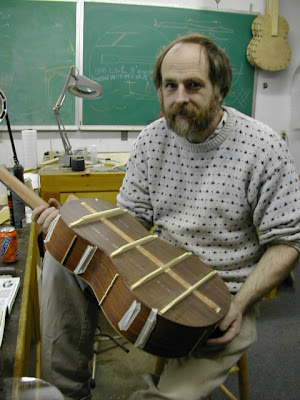 Alan Chapman is a brilliant New England luthier. Indeed--a luthier's luthier. In my mind he is a distinguished model for other builders--an indefatigable researcher as well as a master craftsman. He is an eternal tinkerer of the guitar's form, each iteration revealing to him a yet deeper "hidden truth" of the instrument. His finished guitars are correspondingly all the wiser: loud, robust and impressive. His modus operandi is to create test guitars, for example, one with a replaceable belly--that is, one that allows him to remove the entire lower belly of the soundboard, starting from half of the lower transversal face brace, and to replace it with new lower sections with different bracing schemes, noting the difference in each case. For him, this goes a long way to satisfy such queries--as closely as anyone can imagine-- "all things remaining the same, what is the difference between a five-bar and a seven bar fan?" Or what effect do the bottom cutoff bars make? or any number of other queries. In the photo above, he has made a test guitar with the back glued on with the braces on the outside--to actually hear what changes as you remove material from them. He also glues on toothpicks to the bridges of his test guitars, to ascertain the effect of changes in mass. Brilliant? Sadly, I cannot convey what the fruits of his labors are--how could I? The changes can only be perceived--not described in text form. But his experiments speak only to him and make him all the wiser for it.
Alan writes:
I appreciate the sound of traditional, fan-braced guitars.  For the last twenty-five years, I designed and built traditional fan-braced guitars attempting to capture and define the warmth and beauty of that sound found in 60ís and 70's Bream recordings.  Who can resist the nuance of a vintage Hauser or Romanillos guitar or the warmth of a 60s Ramirez?  Even so, I am increasingly drawn to the power, clarity, sustain and greater dynamic range of some newer designs.
New designs with lattice and core-box tops play louder with less effort.  A player can play longer with less fatigue and include more technically demanding material in his or her repertoire.  Most professionals agree the recital material of the 90s is much more demanding on average than a decade or more ago.  Players are acquiring more new pieces and playing more chamber works with less and less time to polish and settle.  Lattice and core-box guitars allow the player to bring new pieces to a higher level quicker while conserving physical resources.
Australian builder Greg Smallman, perhaps inspired by Martin x-braced guitars, created his first successful lattice-braced guitar in 1981.  The lattice (picture a diagonal porch lattice) consists of eighteen interlocking braces.  It is an effective and strong bracing technique which allows a guitarís top to be about one-half the thickness of a traditional top.
In my building, I recently ran a series of eighty test tops to arrive at a stable design.  I now offer a lattice guitar with a traditional back (rather than a Smallman-type molded, braceless back) which gives the player a warmer experience.  Any lost power is restored by reducing inertia structurally throughout.
The lattice is now a widely accepted bracing pattern which I believe will rival the popularity of traditional fan bracing.  Simply building a lattice guitar is no guarantee of making a fine guitar, of course.  Using the lattice is as subtle an art as any luthierie but well worth the effort.