Why not just screw the neck on?

A correspondent asked me why I prefer to use a neck joint system that relies on barrel-bolts. He writes,

I wouldn't use barrel nuts at all. I would take a hanger bolt like this: I would drill a slightly oversized hole into the neck heel, chop the hanger bolt to length, and thread it in, locked down with epoxy. The epoxy will allow us to use an oversized hole so as not to put any significant compressive stress on the neck (we wouldn't want to risk a stress fracture, either during installation or 100 years from now). It would still "thread" into the neck, but it would be a loose threading and the epoxy will permanently lock it in place. Then I would use a nut inside the guitar body. Inside the body, I would use a spherical washer so that the bolt alignment/neck angle is not critical. I think this is a very unconventional arraignment and would probably have luthiers worldwide looking at us with scorn, but aside from that I think it's very simple and workable.

Screwing the neck into the body is a worthy endeavor. But...

in the guitar world. There's almost a thousand years of "prior art" in the stringed instrument universe. There's very little low-tech guitar luthiery advances you can think of that haven't been done previously--a dozen times.

You're free to react to my barrel bolt system--be my guest! You won't get any flak from me, or any luthiers for that matter--they don't know any better. But you will get flack from formal cabinetmakers. My old friend Ian Kirby, instructor at the Royal College of Cabinetmaking told me when I brought up the subject, that one of the Ten Commandments of woodworking is "never screw into end grain." HE would look upon your idea as inelegant and hazard-prone.

But not me. Because his field is cabinets. Because I know that screwing necks on has been a luthier tactic since luthiers learned to cast lead or iron screws and bolts. Lag screws appear on lutes made during the Late Middle Ages and Renaissance. Taylor Guitars uses cap-head machine screws that screw into wood-threaded inserts inserted into the end-grain of the heel. Most luthiery schools teach two neck joints, tapered dovetail and neck screws. Period.

When I devised the barrel bolt system, advisedly, I never announced or claimed first use. And guess what? I had been using it for years when I discovered that my old partner, Michael Millard of Froggy Bottom Guitar fame, had devised it quite independently on his own for several years before also. Exactly the same arrangement. For exactly the same reasons:

1- the pinned mortise and tenon system was difficult, tedious and complex. As is the tapered dovetail.
2- we hated the look of two unartful nuts on the headblock staring at you from the soundhole.
3- we were concerned about the long-term effects of screwing into end grain, or the short-term effects of threading a screw into the endgrain heel.
4- you could get the barrel bolts at the local hardware store. You don't have to turn your own wooden taper pins.
5- having to change the neck to body angle throws bending stresses onto the screws, which throws strain onto the wooden parts. The rotating barrel in the barrel-bolt system solves that problem.

I confess, your selection of the spherical washer as a solution to 5) is a clever hardware choice. And your idea of drilling an oversize hole in the heel and casting epoxy threads didn't occur to us, but you'd have to be pretty confident that the entire epoxy plug wouldn't just pull out someday.

Your wanting to invent your own system has a noble heritage, so I won't be the one to squelch it. I'd experiment with how much force is required to pull out the epoxy plug first. Then go ahead--be my guest. Build your own guitar with a personal neck-attachment system that you think best fits your own priorities.
Posted by William. R. Cumpiano 4 comments:

The Urge to Inlay

I love the Grizzly tool catalog, and I'm delighted to see that like myself, Grizzly's president is himself a guitarmaking devotee. I often leaf through the Grizzly catalog's pages, salivating over the 18" wide-belt abrasive planer which I probably should get to replace my rickety 35-year old homemade 14" filetier, Galloping Gertie. Mr. Grizzly's guitar work is proudly displayed on various places around his impressive and weighty catalog, along with huge Gear-Head, Cam Lock Spindle, Gap Bed Lathes. I own half a dozen much smaller Grizzly stationary power tools myself, and for the price, they give remarkably good service. And I absolutely LOVE the bridge pins he supplies" and have been using them exclusively. The ones with the abalone dots surrounded by tiny brass rings. They're lovely. I hope he keeps supplying them forever. 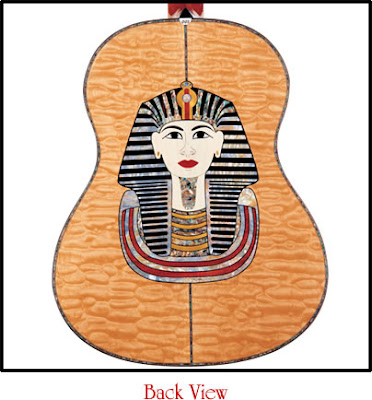 Above is an example of his painstaking work, as displayed in a personal page on his online Grizzly catalog. Every time I look at it, it begs me to ask, Mr. Grizzly president, kudos for your ambitious effort, but: what on earth does Tutankhamun have to do with guitars? Okay, images of cowboys on horses surrounded with cactuses riding into the sunset--or even hula girls playing ukeleles. I can kinda see the connection. They've decorated guitars since the early 20th century. But an 18th dynasty Egyptian pharaoh?

To me, this speaks to a peculiar urge that is so prevalent in my field. The urge to Inlay. I'm intrigued by the urge to apply seemingly random images of all sorts on guitar surfaces. What do these disjointed images add to the already-elegant and sensual form, the iconic shape beloved around the world for a thousand years? I marvel every time I view photographic displays of fingerboard inlay masterpieces--with the strings removed of course, so the pesky strings don't interfere with our clear view of the real masterpiece.

Well, to me, the guitar's pristine form is as much awesomeness as I want to behold at one time, without distraction, thank you.
Posted by William. R. Cumpiano 3 comments:

Quick question. Is the hype about Varnish finish true? Does it make a big difference in sound? Is the finish on the top only?

Oil varnish is indeed a superior instrument finish for not only it's film hardness and high solids content but also–when expertly applied–its rich, warm glow. It's all but outdated in the guitar world, however: I know of only one maker currently oil varnishing his guitars. The main problem is that it takes several days to dry, because it dries by oxidation--slowly. Lacquer dries by evaporation--quickly. Not only does varnish's slow-drying properties make it time-consuming to apply, but problematically, as it dries it can accumulate floating particles in the air sticking to it. So it requires a scrupulously clean application environment. On the other hand, lacquer skins over in minutes, repelling any floating particles. You can theoretically apply a lacquer finish in a day--but it takes several days for an oil varnish coat to fully dry.

As far as whether it is "better" than lacquer, one would have to define "better," of course. People are always asking me, what's better? Better how? In film strength and durability? That can be judged objectively, and the answer is...yes, but only marginally. In sound? Better in appearance? That cannot be judged objectively. How would you determine that? Does it result in better sound? By which criteria? By whose criteria? How do you set up a test? How do you evaluate such a test?

Now as far as the hype of varnish's "superior sound," it's reputation comes, no doubt, from its traditional high-class associations with the bowed instrument world--the playground of the elites. When a violin or a cello is played before varnishing, that is, while its "in-the-white," they usually display an unpleasantly harsh, strident and scratchy sound. The application of varnish notably "smoothes" the sound out, turning scratchy into beautiful: thus the age-old, esoteric mystique of varnish in violin culture. So it must also be good for lowly guitars too, eh?

But violins are from Mars, guitars are from Venus. Arm-driven violin bows dump massive amounts of energy onto the strings–continuously. Your finger tips apply only modest amounts of energy into your guitar, a bit more by the action of leverage if you use a pick. Accordingly, the rule on a guitar is that you DON'T want the finish coat to dampen any portion of the guitar's response, the applicable rule being "less is more." On the violins however, you want the finish to dampen portions of the response lying in the unwanted frequency bands. The function of the finish film in perfecting the violin's response is a significant factor in its world, whereupon the major issue of the finish in perfecting the guitar's sound is "how little can I apply and still be able to polish it out?"

Interestingly, this is only one of several preachy "violin lore" dictums that have mindlessly passed on into the guitar world. The most glaring one is that if f-hole archtops are the thing for violins and cellos, they must be good for guitars. Don't get me started on that: I'm still waiting for an arch-top guitar to equal a flat top in loudness, sustain, and tonal complexity. But that's just me.
Oh, and then there's the "remove and replace only one string at a time" canard which I'm often asked to explain. Clearly on a violin if you remove all the strings at once, the bridge falls off, and the sound post can drop, too. But I'm yet waiting for someone to give me a persuasive reason for following that rule on guitars.
Someday the guitar world will get over its poor-cousin-to-the-violin inferiority complex.
Posted by William. R. Cumpiano 2 comments: