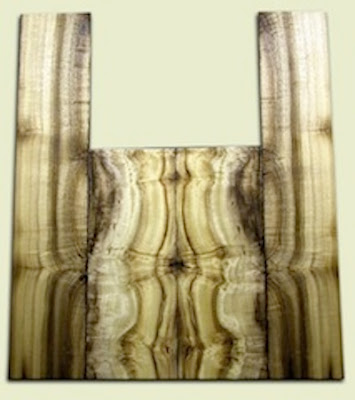 I'm constantly receiving unsolicited mail from tonewood suppliers, with pictures of guitar sets like the one above, usually with stratospheric prices attached. It makes me pause and wonder if it would be a good marketing move to have my next guitar look like a Rohrschach test.
Naah, I'm more of a form-follows-function guy. Bauhaus aesthetics was thoroughly drilled into my head during my early years in art school. Now, when considering an artistic decision, I think back at what my Form and Structure instructor would say. In this case, I can hear him ask, "is a guitar's pure, highly-evolved form so deficient, so uninteresting, that it needs all that pretty stuff lathered onto it?" I know he'd berate all those objet d'art guitars pictured in those upscale wet-dream guitar magazines, dripping with glistening pearl and abalone acanthus leaves and Parthenon scrolls, all slithering up and down the fingerboard and headstock--and drooling over onto the back and sides. He'd berate them in the same way. It's so...it's so...nineteenth century! A guitar's pure form isn't beautiful enough for you? Noo--you gotta trowel on some of that pretty stuff. NOW it's really pretty.
Well maybe the Rohrschach wood is okay 'cause--well, it's nature, isn't it? If its from a burl--like the above--its really cut from a monster knot the wood grows around a wound, or just a vegetable cancer growth. Not exactly the kind of Nature you'd like to warm up to. Or if its wild wood from a stump, it grows that way so the tree won't tip over when the wind blows. So that means all that skittish tension wood should be built into something that absolutely-positively must be dimensionally stable? A fine recipe for an eventual wall-hanging!
When wood gets to look like that sample above, its fiber structure gets to approximate something like oatmeal: nothing like the orderly array of long, relaxed fibers that you imagine all those mathematically-organized harmonics would choose to travel across, unimpeded and unhindered, hither and fro.
No, I know it doesn't do that. I'm just imagining. But I remember what happened in my early days when I thought it would be bitchin' to have crazy wood all over my guitar: I had to super-glue 10,000 splits in the side after bending them, and then several years later I had to replace the back after the plates cycled through several climate changes and seasons, when that cool oatmeal-wood actually began to look like lumpy oatmeal. A bitter lesson: that very kewel oatmeal-wood is not just awesome--it's big trouble.
Posted by William. R. Cumpiano 4 comments: