Florida State University physical chemist Dr. Michael Kasha created a stir in the guitar field thirty-five years ago when he proposed a systems-analysis approach to the resolution of the age old dilemma of structure vs. tone in the guitar. Dr. Kasha is Distinguished University Research Professor at FSU, an elected member of both the National Academy of Sciences and the American Academy of Arts & Sciences--the Oscar people.
The traditional specifications for classical guitarmaking were established for subsequent generations of makers and players to follow by the venerated nineteenth-century Spanish luthier Antonio de Torres (he died about the time of the American Civil War). Torres assembled into his new design what he considered the best of all the various ideas that were being used in Europe during his time. The combination of his chosen scale length, soundbox size, bracing pattern (which consisted of a series of long struts under the bridge) and even his decoration scheme became the "classic" guitar which we see today all over the world.
In a nutshell, Kasha proposed that under the traditional system, the long stiffening bars under the top unduly restricted the soundboard's movements. Instead, he proposed a multiplicity of no less than twenty short braces fanning out in what appeared to be a peculiar, yet seemingly purposeful pattern around the bridge. Second, he proposed an aluminum stiffener imbedded into the heel to keep the body and neck more integral and less flexible relative to each other. He also proposed an assymetrically-shaped bridge which purportedly coupled the bass and treble components of the string's signal more efficiently to the guitar. Unfortunately the lopsided Kasha bridge, which became the most visible and distinctive feature of the system, gave the guitar face a comical sneer, which perhaps contributed to the guitar's lack of acceptance in a rather conservative and hide-bound market place. 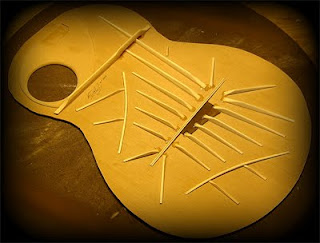 Do you do any extra reinforcing on the side in the bend of the cutaway? I was thinking that the bend itself provides some structural rigidity in one sense but that it could also be a weak spot if the guitar were dropped.
Here's my perspective: It's not your responsibility to make the guitar drop-proof. You're making crystal goblets, not cafeteria tumblers. You're not making a back-packing guitar either. What you're making is a delicate eggshell optimized for sound, not rugby. Any treatment other than taking it out of the case, playing it, and putting it back in the case is abuse.
Posted by William. R. Cumpiano No comments: