In short, José was a Spanish luthier who escaped Spain's harsh dictatorship of the 30s, 40s and 50s and established his craft in Argentina. Interesting guy, fascinating life. Fascinating personality. Here's his story:

When he was a boy, José Yacoppi learned that in life, you don't need much to survive. Every time his father--a guitarmaking luthier like him--was chased by Franco's men in Spain, the Nazis in France and the war in Europe, he learned that a workshop had to fit into a valise, and the life of an entire family could depend on one guitar. Every time they had to move all they had to take with them was a finished instrument so that José could show his art and get supporters until he could begin anew. In 1949 he arrived in Argentina and opened his shop on quiet San Fernando street.

It's best you know from the start: the best of Yacoppi, after his guitars, is his black humor. He's been exporting guitars to Japan at a pace of 25 a year. "Look, I know there are a bunch of my guitars out there, and when I'm dead, their price is going to rise. Outside Argentina, my guitars sell for high prices. Do you know Eric Clapton? He bought a Yacoppi in Germany three years ago and paid seven thousand dollars. And at the Sotheby's auction house in London, he knocked down a 1950 Yacoppi after paying ten thousand dollars. I wish I had one to sell. It's that in 1950 I was very young, and what was I to guess, that my shop would eventually become so highly regarded. I also never thought I'd live so long. Look, once I even made a vihüela, the grandmother of guitars, that one over there..."

He walks to a showcase and takes out a vihuela, a large instrument studded with mother of pearl.
"The amount of work on this is so monstrous, so huge, that I hardly can believe it was me who did it. Once I took it to Europe. I told myself, "I'm going to kill with this one." He took it to Sotheby's and someone there said, "Oh, how pretty. Who made it?" "Me." "Oh, but you're alive." I say, "Yes, I'm alive." And he says, "Oh, no, you've got to be deceased." I told him, "I'll shoot myself and come back." 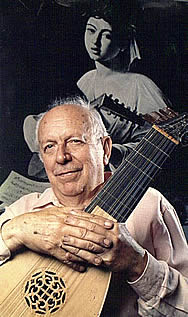 What do you think about the traditional spanish way of having the neck slightly sloped forward by 2-3 mm?

As to the "Spanish" tradition of sloping the neck forward (I didn't know that it was uniquely a Spanish tradition), it's supposed to provide ample string clearance to avoid buzzing during vigorous playing without having to make the bridge massively tall. If the guitar is to usually play quietly for an audience in a small room it is unnecessary. I've learned that one must be careful to pitch it no more than 1.5mm at the nut, or impossibly high action may result.

9/12/11 Revision: I hasten to modify these remarks because they proved to be misleading: by stating the concept of "pitching the neck forward" I really needed to clarify that this effect can be achieved in a number of valid ways: by 1)  tapering the fingerboard (so it begins thicker at the nut and ends thinner at the sound hole end) and then gluing it down to a neckshaft which is perfectly level with the perimeter of the soundboard--in which case the solera must be perfectly flat from end to end (and rigid enough not to distort or sag during the building process) and 2), keeping the fingerboard at a constant thickness (usually 1/4-inch) and tapering the neck-arm of the solera so that it is 1/16-inch thinner at it's end, which should coincide with the nut location of the neck. This the entire neck shaft will be induced to pitch forward (or upwards) by 1/16-inch and be fixed in that orientation when the back is glued on. This requires that you hollow the upper transversal face brace by about 1/32 to accept the diving fingerboard-fingerboard end (draft it out to ascertain the correct amount).

There is yet a third scheme which is to keep the solera un-tapered, and thus the neck shaft level with the soundboard perimeter, while keeping the fingerboard uniform in thickness along it's entire length. This requires however, that you induce a 1/8-inch to 3/16-inch dome or swelling in your soundboard at the bridge location--by curving all your fans and bridge-bottom. This will create a favorable action-height by raising the bridge rather than "pitching the neck forward."

Posted by William. R. Cumpiano 5 comments: Links to this post

I can best answer your question with an anecdote told to me by luthier Jeffrey Elliott many years ago (I hope the details are still accurate)--Jeffrey was accompanying the great Julian Bream on one of his occasional US tours. Bream often invited Jeffrey, whom he regarded highly, to accompany him in his US travels, to keep an eye on the several instruments he brought with him on his tour.

One day he told Jeffrey that he was dissatisfied with the tone of his Bouchet--in comparison to that of his Romanillos--and said that he thought it was the Bouchet's long transverse bridge bar, missing on the Romanillos, that made the difference. He asked Jeffrey to take it out. At first Jeffrey was very hesitant, given the value of the instrument, but Bream persuaded him, saying that he would accept all responsibility should the venture prove disastrous.

So in a hotel room and some improvised tools, Jeffrey removed the strings and proceeded to break up and carefully remove the rather large Bouchet's transversal bridge bar. Well, the upshot was that the venture was not disastrous, indeed it was a great success, according to Bream--and Jeffrey--the loss of the bar transformed the instrument, it's voice opening up dramatically. His account effectively kept me from ever experimenting with the Bouchet scheme.

Posted by William. R. Cumpiano No comments: Links to this post